Father and son team dedicated to their clients and the law

Steven Vosbikian, Esquire is a founding partner of VOSBIKIAN & VOSBIKIAN, focusing exclusively on immigration law. Mr. Vosbikian has earned a superb reputation as an immigration attorney after having dedicated his primary emphasis in this area of practice for more than twenty-five years. His many clients can attest to his passionate and dedicated approach, personal attention to detail, and creative style in finding the appropriate legal solution to complex immigration matters.

Mr. Vosbikian received his bachelor’s degree in Business Administration from Temple University in 1971 in Philadelphia, PA. Soon thereafter, he went on to graduate from Temple University’s Beasley School of Law in 1975. For five years, he defended the City of Philadelphia as an attorney with the City Solicitor’s Office. It was here that he garnered the knowledge and expertise in civil litigation, which helped jump-start his legal career. In 1980, Mr. Vosbikian opened his own law firm, focusing primarily on personal injury. During the mid 1980’s, a transition took place from personal injury to immigration law.

Mr. Vosbikian is particularly regarded among his colleagues and many past clients for his reputation in taking on the most challenging immigration cases. These include removal proceedings before the immigration court, criminal matters, motions to reopen existing deportation orders, ICE detainers and bond hearings, waiver applications for fraud and misrepresentation and appeals to the Board of Immigration Appeals and Federal Courts.

Mr. Vosbikian has earned a reputation for maintaining close client contact as well as keeping organized and responsive to a heavy caseload. Mr. Vosbikian is particularly adept at navigating through the administrative and legal process in achieving successful client results.

“I believe in developing a case plan and understanding the client’s goals and objectives at the outset of representation. It is important not only to focus on the case, but to be aware of the client’s circumstances and concerns. I also believe in being accessible and working directly with the client, using a hands-on approach.” 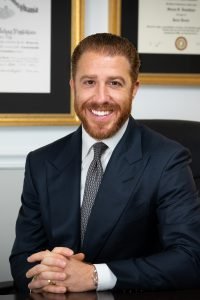 Mr. Vosbikian received his bachelor’s degree from Rutgers State University in 2003 in New Brunswick, NJ. He graduated from Rutgers School of Law – Camden in 2010. As a law student he worked as a student attorney with the Civil Practice Clinic, assisting indigent clients with their immigration issues. He also wrote as a member for the Rutgers Journal of Law & Religion, focusing on the harsh obstacles faced by those seeking asylum in the United States.

Mr. Vosbikian has a unique ability to negotiate in the most adversarial of settings. His charismatic personality and naturally aggressive style are his strong suits, which have led to successful results in many diverse immigration and collaterally-related matters, including: removal proceedings before the immigration court, citizenship and naturalization, adjustment of status, asylum cases, waivers, consular processing, criminal matters, divorce, and immigration cases litigated in federal court.

“Immigration law is a fascinating and complex field of law that presents challenging issues in every-day practice. When faced with complicated matters, I enthusiastically take on the task of converting problems into successful legal solutions.”